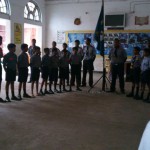 Recruits’ Training Camp, the Candle Light Investiture, AGM of RCOSA, Achievers’ Night 2011 & the Inter Patrol Six a Side Cricket Tournament of the Gold Troop were successfully conducted during the last weekend.

Recruits Training Camp started on Friday the 25th & concluded on Sunday morning. 36 recruits (scouts without membership) took part in the camp & 8 of the senior most scouts in the Junior Troop participated in the camp to guide the recruits throughout the camp as Patrol Leaders & Asst. Patrol Leaders of the patrols. The camp programme was more focused towards the requirements of the membership badge.

The camp proved to be helpful to these recruits as 5 of them got invested at the Candle Light Investiture held on the night of 26th. We expect more recruits to complete their membership badge during the coming months, as the foundation for it was laid at the camp.

The Annual General Meeting of the Royal College Old Scouts Association was held on the same day at the Interactive White Board Room. It was followed by the much awaited Achievers’ Night 2011. The proceedings started with the arrival of the Principal of Royal College Mr. Upali Gunasekera, Group Scout Leader Mr. Sudath Liyanagunawardena, Secretary of Royal College Union Mr. Manju Ariyarathne, Past MICs, Present MIC, members of the Parents’ Committee, Cub Akelas, Old Scouts and other invitees. After the Welcome Address, the certificates were awarded to the members of the patrols which became Champions, Runners Up & 2nd Runners Up at the Lt. Col. M.K.J Cantlay & Job Week Challenge Shield Competitions & the two shields were also awarded to the champions of the two competitions. Also the Appointment Letters of the Instructors, Asst. Instructors, Patrol Leaders & Asst. Patrol Leaders who successfully completed the Patrol Leaders & Instructors Training Camp 2012 held from 18th to 20th February 2012 at the Lee Dassanayake Scout Training Centre, Meerigama were awarded. The items purchased to the Troop QM store from the donations of Old Scouts Mr. Y Sumithran & Mr. Daminda Yapa were symbolically handed over to the troop at this ceremony. The agenda also comprised of the Principal’s Speech and the colorful entertainment item by our scouts. The ceremony concluded after Leader in Charge Mr. Supun Jayalath proposed the Vote of Thanks. Everyone present then joined the Old Scouts at the Fellowship Dinner of the RCOSA.

After the Recruits’ Training Camp concluded on the Sunday morning, the Scouts who took part in the camp & the other scouts of the troop who arrived on Saturday night for the Achievers’ Night took part in the Inter Patrol Six a Side Cricket Tournament organized by the Patrol Leaders Council. The Scouts enjoyed the cricket as well as the live commentary, music, face painting & the “must watch” moments of the friendly match between the Instructors & the Patrol Leaders which the Patrol Leaders won by 4 runs. The day concluded with presentation ceremony, where the Patrol Leader Duvindu Induranga clinched the Player of the Tournament title & the Kingfisher Patrol won the trophy while the Hawks Patrol became Runners Up. Patrol Leaders Council should be appreciated for giving life to this tradition after laps of 6 years.

It was a busy & a successful weekend for the Gold Troop & I would like to thank each & everyone who helped us during this cause. A special word should be mentioned about the 7 Instructors of the troop who worked tirelessly during day & night for the last month or so to make all this, a success!!!

0 thoughts on “A busy & a successful weekend for the Gold Troop!”