Colombo Centenary International Jamboree 2014 Organized by the Colombo District Scout Association was recently held at the Ygro Camp Site at Dummmalasuriya, Madampe from 1st of August 2014. 37 Scouts of Gold Troop proudly participated at the Jamboree under Royal College Flag. Mr Pasan Jayakody and Mr Supun Jayalath, Assistant Scout Leaders of Gold Troop, took part in the Jamboree as members of the Jamboree Organizing Committee. The mammoth gateway crafted by the scouts at the entrance of the Gold Troop camp site was self- evidentiary for the capabilities and skills of the present-day brothers of the Gold Troop. The colourful and creative gateway of the Gold Troop was one of the most attractive items on the Jamboree Site. END_OF_DOCUMENT_TOKEN_TO_BE_REPLACED

By Vinura Perera, 7 years ago Colombo Camporee is one of the most anticipated events in the Colombo District Scout Year Calendar. This is an annual fixture where more than 2000 scouts from around 40 scout troops camp at the Vihara Maha Devi Park & engage in different camp activities such as the Opening Ceremony, Closing Ceremony, Skill-o-rama (Activity Award), Talent Show, Arena Display, Sports Tournaments, Wide Games & many more. The first Camporee was organized by Captain Vernon W. Halpe (a teacher at Royal Primary School at that time) and Mr. Ali Ossen, at the Royal Primary Grounds from 5th to 7th August 1949, with just a few hundred Scouts. Since then the Camporee has grown by leaps & bounds & has become a unique tradition of Colombo Scouting. This year the 49th Colombo Camporee will be organized under the theme "Passion for the environment" and will be held from 23rd to 27th August 2012 at the Vihara Maha Devi Park, Colombo. The following are the basic information on the main camp activities organized by the district authorities, END_OF_DOCUMENT_TOKEN_TO_BE_REPLACED 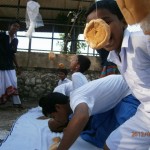 ‎'Awurud Uthsawaya 2012' was a great success! It was a day filled with fun & joy, the celebrations kicked off with the traditional "Awurudu Kama Mesaya" & then the Junior Scouts who were present got the chance to take part in the New Year games that were organized.The day concluded after the winners of the games were recognized at a small Awarding Ceremony. Hats off to the Senior Scouts batch (grade 11s) for organizing one of the best Awurudu Celebrations in the recent history!!! END_OF_DOCUMENT_TOKEN_TO_BE_REPLACED

We wish all the scouts, leaders, parents, old scouts & well wishers of the 42nd Colombo Scout Group a Happy & a Prosperous Sinhala & Tamil New Year! Wishing you a great year ahead, we invite Read more...

The walk to commemorate the centenary of Scouting in Sri Lanka, jointly organized by Sri Lanka Scout Association and Colombo District Branch Association was held on Saturday, 25th of February 2012. The walk commenced at Read more...